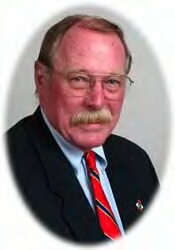 On Friday, July 17, 2015  Richard (Dick) Leo Mayer of Tonasket passed away peacefully at home at the age of 76 years.

Dick was predeceased by his parents, Robert and Kathleen Mayer.   Left behind to remember him are his twin brother Roberto Mayer, an Oblate missionary priest in Sao Paulo, Brazil; his sister, Jeanne Bishop; his children Chris (Jodie) Mayer, Scott Mayer and Amy Powell; his grandchildren Travis, Logan, Addison and Felicity and his good friend Donna Kelso.

Dick had been a member of Kiwanis for 25 years, serving in many offices including Governor of the Pacific Northwest District in 2004-05.    Although he lived in Washington State, Dick was a charter member of the Kiwanis Club of Osoyoos and has served the Osoyoos community through Kiwanis for the past 10 years.

Dick was also a member of Knights of Columbus, Ducks Unlimited, American Legion, AmVets (American Veterans) and the Fraternal Order of Eagles.   Dick served five years as Commander of the Tonasket American Legion Post #82 and also served a term as President of the Tonasket Chamber of Commerce.    He was currently serving as Finance Officer for AmVets Post #69 in Chesaw.

There will be a 'Celebration of Life' for Dick on Thursday, August, 13th beginning at 2:00 p.m. with a Legion service to be held at the Tonasket Cemetery.   This will be followed by a reception and sharing time at the Tonasket Eagles.